The value of the soul

A man went to God and asked Him:

`How much is worth my life?`

God gave him a stone and said:

`Find the value of this stone, but try not to sell it!`

The man took the stone and left. On his way he met a man who sold oranges and asked that one how much he thought his stone valued. The seller saw the shining stone, examined it and said:

`If you give me the stone I give you twelve oranges in turn.`

The man apologized and said that God asked him not to sell it so he continued his way.

After a while he saw a greengrocer :

`What is the value of this stone?`the man asked him

The greengrocer took the stone looked at it and said:

`I give you a sack of potatoes in change for it.`

The man apologized once again and said he could not sell it then went on his way. After a while he arrived at a jewels shop. He entered and asked the jeweler what was the value of his tone. The jeweler took the stone and examined it carefully and said:

When the man refused by nodding his head the jeweler said:

The man explained he could not sell it and went again on his way.

After a short time he arrived at a shop of precious stones. He went to the seller and asked him the same question, what was the value of his stone. The seller took the stone put it on a piece of velvet and examined it with great care.

`Where do you have this priceless stone from ?` he asked. Even if I sold the whole world and my whole life I wouldn`t have the needed money to buy this wonder, he added.

Surprised and puzzled the man came back to God and related what had happened to him.

`Now God tell me, how much is worth my life?`

`The answers you received from the seller of oranges, the greengrocer, the jeweler and the seller of precious stones explain the value of life.

You could be a precious stone, even a priceless one but the men will appreciate you depending on their level of information, on the trust they have in you, on their motivation, on their ambition and the risk they assume in relation with you.

But do not be afraid, you will surely find someone who will realize your true value.

Happiness is a matter of choice

A 92 y.o man, who looked quite well for his age has come today at a retirement home.… 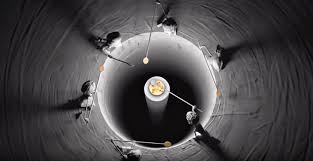 How is heaven and hell?

`Abba, how is hell?` `I’ll tell you a story I heard. There was ince a simple man who…