A young man was upset because he didn`t have enough money and he couldn`t buy everything he needed. He was walking sad on the street not knowing how to get out of that situation. But as he was walking in that state of mind, he suddenly ran into someone. Great was his wonder to see that because of his recklessness he had run into a poor blind man. The poor man was trying to help himself with a stick and find the way home. Our young man helped him leading him by his arm.

Seeing how unfortunate are others, the young man did not think anymore to anything else but to the following thing: how rich he was. He didn`t have enough money for everything he wanted but he had the greatest treasure in the world which money can`t buy: health with everything coming out of it – power for work, joy and good disposition.

He had realized that there are people who became cripple because of some accidents. But his legs could lead him anywhere. Others became blind. But he could see in any moment all the beauties surrounding him. But unfortunately, there are some people who are blind and crippled spiritually because their soul was emptied of joy, hope and love. These are unhappy indeed.

The more benevolent you will be, the more peace your soul will have. The bad and stingy one never gives anything, not even a glass of water or an advice, although these things wouldn`t cost him anything. Is a man like this of any use to the others?

If we look around us we will see that nothing lives only for itself. Even the most common tree, despite the fact that it doesn`t give us any fruit, it offers us at least the chance to rest under its shadow.

„The kind one sees kindness everywhere; the bad one doesn`t see it anywhere.” (Proverb)

Prayer to the Holly Trinity

A young man who trifled the Christian Church and faith quite often, came to a priest and asked… 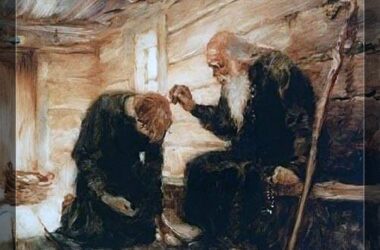 The change of the confessor

`Father, when someone is forced for a certain reason to change his confessor is it necessary to confess…

How much importance has even a single minute in this life

How precious is the time of this life! Each minute has a lot of importance because in a…