`Most holy and pure Virgin, ascending to heaven, with your hand you gave to Thomas, the Apostle, your most holy girdle` chants the Church in the troparion from the feast of Placing in the coffer  the holy girdle of the Most Holy Theotokos.

Two pious women from Jerusalem promised to keep the holy girdle. Theotokos, before her repose, asked saint John, the Apostle, to give them as well her two robes. The mission of preserving them from generation to generation was continued by a pious maiden who was from this family.

Bringing the holy cincture in Constantinople

In the time of emperor Arcadius, the son of Theodosios the Great the holy girdle was moved to Constantinople. On August the 31st the emperor put the holy girdle in a very beautiful coffer, which he named holy coffer, to protect the capital of the empire and its inhabitants of any hostile attack, misfortune or demonic intrigue.

This coffer was not opened till the days of emperor Leon the Wise (886-912). The wife of the emperor, Zoe, while being sick, had a dream with Theotokos and she told the empress she had to convince the Patriarch to take out the holy girdle from the coffer, where it had been kept since the 4th century. When they put the girdle on the sick empress, she was immediately healed. As a sign of gratitude and by living a virtuous life, the empress adorned the girdle embroidering it with golden thread and put it back in the coffer where it had been placed by Arcadius.

The partition of the holy girdle

In the second part of the 12th century the holy girdle was cut into pieces and these were given to several churches from Constantinople.

After Constantinople was conquered by crusaders, during the 4th crusade, in 1204 some pieces were stolen by the bands of barbarians and taken to the West. Luckily, they were not all lost.

After the crusade two pieces of the holy girdle arrived in France and today they are kept at the Church Le Puy-Notre-Dame.

At Vatoped Monastery from Athos

According to a tradition, John Kaloyan, defeating Alexios Anghelos the 3rd takes from Constantinople as a war trophy a piece of the holy girdle this being given as a gift in the next century to Vatoped Monastery by the prince of the Serbs Lazar I Hrebeljanović 1372-1389.

During the Ottoman occupation the monks from Vatoped made processions with the Holy Girdle in Crete, Macedonia, Tracia, Constantinople and Asia Minor for the sanctification and support of the enslaved people and for freeing them of any dangerous sickness.

In 1813, the girdle of Theotokos from Vatoped was brought in Valachia for driving away the plague.

The Blessing of the Holy Cincture for other monasteries

Dionisiu Monastery has a small piece of the Holy Girdle of Theotokos which they received from Vatoped in exchange for a finger of the right hand of Saint John the Baptist.

Another small piece of the Holy Girdle is found at  Zugdidi, in Georgia brought by the daughter of the Byzantine emperor Roman, married with the Georgian emperor Abuchaz. This one being healed by touching the girdle took with her in her new homeland the piece from the holy girdle. At the order of the Russian tsar Alexander the 1st in Zugzidi in Mingrelia it was built a beautiful church where is kept the piece from the Holy Girdle of Theotokos for healing terrible sufferings.

The cincture of Theotokos from Kato Xenia

In 1522, two pieces of the holy girdle were given to the nunnery Kato Xenia (located at 50 km of Volos, Greece) during a great plague pandemic. Immediately after the holy girdle was brought, the men were healed. 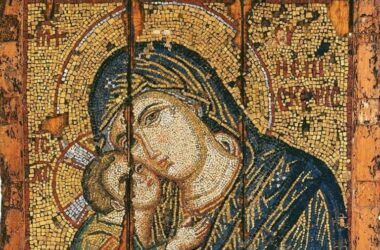 Every year on the 27th of March, at two days after the great glorious holy feast of Annunciation,… 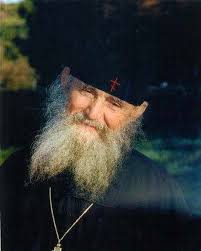 No toil, suffering or temptation, my blessed son, can compare with that happy life. Thousands of lives if…