31 Jesus went on to say, “To what, then, can I compare the people of this generation? What are they like? 32 They are like children sitting in the marketplace and calling out to each other:

33 For John the Baptist came neither eating bread nor drinking wine, and you say, ‘He has a demon.’ 34 The Son of Man came eating and drinking, and you say, ‘Here is a glutton and a drunkard, a friend of tax collectors and sinners.’ 35 But wisdom is proved right by all her children.”

How God judges us and how we judge ourselve

`The Jews brought before the Saviour (John 8, 3-11) an adulterer woman and if He had forgiven her they would have blame Him of infringement of the law for He had said : `Do not think that I have come to abolish the Law ; I have not come to abolish it but to fulfill it `(Matthew 5, 17), and if He had condemned her they would have told him that He had broken Hos own teaching about forgiveness. Seeing these Jesus, the Lord bent his head to the earth and wrote on the sand. What He wrote if not those prophetical words: Oh land hear the word of the Lord. (Jeremiah 22, 29), which were written about Jeconiah by Jeremiah the prophet? When the Jews ask questions their names are written on earth. On earth are written only those who estranged themselves of their Father, who tempt their Father, who say blasphemies against the Saviour. When the Jews ask questions Jesus bends His head for `he has not where to lay His head. `(Matthew 8, 20),

He raises back His head for expressing a teaching and says: Who is without sin let him be the first to throw a stone at her. (John 8, 7).

And bending back His head He wrote on earth. Hearing these they began to withdraw first the elders because they had many sins as they had lived more or because  they were the first to understand the power of the teaching being wiser. Those who blamed others for sins began to cry for their sins.

`The sinner has his Judge. Do not take away the right of judgment of the One Born; For Him is reserved the throne of judgment. Do you want to judge as well. You have a throne of judgment too which brings you much benefit and no damage. Take your conscience as your judge. Bring before it all your sins. Search all the sins of your soul, ask it for a detailed account and tell it: Why did you dare to commit that sin or the other one? If it doesn`t want to judge your sins but judges the sins of then others tell it these: `I do not judge you for the sins of the others. Not for those I called you to justify yourself. What is your business if another one is sinful? I ask you: why did you commit this sin or the other one? Defend yourself and do not accuse any other. Look at your own sins not at the sins of the others. Punish your soul with such questions without cease.

Surely, nothing compares with the love a mother feels for her child. Despite all hardships, mothers always manage… 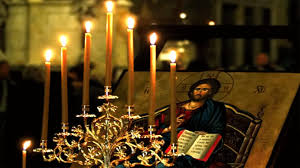 From Patericon A brother askes abba Evrepie : How does  fear of God come in the soul at the…