The monk and the devil of fasting in excess

An elder from a big monastery reached a deep spiritual experience. He prayed a lot, he made all his habitual prayers lovingly, he served at the church, he made his daily duties. His cell was simple and clean, I know as I had been there.

He had lost on the way the dreams of aggrandizement, he was not attached of the physical pleasures, he got rid easily of the temptations from his mind. His life was steady, pure and full of wisdom. This is what he thought.

When he went to the priest who confessed he told him about the peace from his life.

The confessor looked carefully at him, sighed and told him:

`There is no peace in the life of a monk. Life is a permanent struggle, it is a struggle with the devils. Something is wrong with you. This peace is only the calm before the storm.

The devil prepares a great trouble for you. Go and humble yourself in prayer with tears to pass over this trial.

The monk didn`t like at all the words of the old confessor. He was wise, peaceful and passionless.

For about half of a year nothing significant happened. The monk was surer and surer that for the gift of his prayer the devils were afraid of him and avoided him.

After Christmas the monk felt disgust against food. He had the impression that it was a debasement to eat daily, he dreamt about the great fast keepers, he wondered how it would have been if he had fasted completely for the whole week.

He was absent for days from the suppers and the starets noticed. He thought that maybe he was sick and send someone after him.

`Father, we don`t see you much at suppers. What is it going on?`

Father abbot, I have such a disgust against food that I can`t bear anymore our dependence on nutriment like the cattle. Christ fasted for 40 days without anything at all.

The starets looked at him for a long time frowning and then told him:

`Father, I see pride and despise in your words. God gave us the food to thank Him eucharistically and fasting has its rule. From now on I order you not to be absent from supper anymore. You will eat near me to see you.

The monk grew sad. He saw the abbot enemy of fasting, of refrainment and friend of the carousers and of the gluttons. But because of shame he obeyed the order.

After 40 days he dreamt a brig and black devil with a terrible face sneering and shouting: `For three years I prepared you for hell, urging you to keep a severe ascetic refrainment to become full of pride, of our devilish blood. I tempted you to keep a complete fasting. In a few weeks you would have had ulcer which would have killed you in three months. You had come in hell to us full of pride and despise. We have been fasting from the creation of the world only humbleness we can`t have.

The monk cried and he never had contempt for what was human and necessary for life.

(told to me by that father).

If we turn to ourselves, we won`t condemn the others anymore 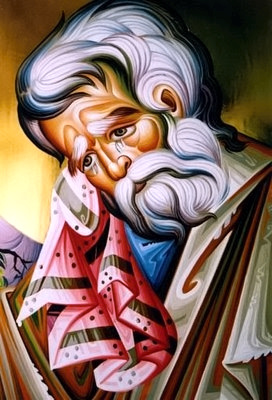 God’s kindness strives to save the man even by using the smallest motive !

God will chase the man who has a good disposition to find his salvation. God`s mercy will chase…

The really happy man is…

Priest Bogdan Chiorean A few years ago I had a patient hospitalized at the beginning of August. She…