When Jesus went to Jerusalem and He was in the house of Simon the leprous, a sinful woman approached Him and poured over his head that precious ointment. Her mention was fixed for this day in accordance with the Word of the Savior who said to be preached in the whole world to everyone her deed full of lore. What urged her to do so?

The love she saw Christ had for everybody, the friendship He showed to all people and especially the fact that he entered the house of a leprous who was considered by Law as unclean and was ordered to live isolated, away of all people. The woman thought He could cure her sickness as well, as he did with the one of that man. And when He was sitting at the table, she poured the expensive ointment over his head. The disciples, especially Judas, scolded her. But Christ defended her for not leaving her good thought. Then Christ speaks about his burial willing to make Judas give up on his sale and to make the woman worthy of the honor to be preached all over the world her good deed. It should be known that this woman seems to be the same at all evangelists, but it is not so.

According to saint John Chrysostom, at the first three evangelists it is the same woman, generally known as the sinful one. But saint evangelist John does not refer at the same woman, but at another one, at Maria, the sister of Lazarus, who had a virtuous life, otherwise Christ would not have loved her.

Maria, unlike the other ones, 6 days before Passover, while the Lord was in her house from Bethany, used ointment and poured it on his holy feet and wiped them with her hair, showing a high respect for Christ, offering him the ointment as to a God. She knew that at oblations it was brought oil to God, the priests ointem themselves and Jacob ointed with oil the pillar risen for God. She brought the oil to him and offered it to him as to the Preacher of God because he had revived her brother from death. For this reason God does not promise her any reward. With this occasion only Judas protests, because he was covetous.

The other woman, the sinful one, according to the other evangelists, Matthew and Mark, poured the precious ointment on the head of Jesus two days before Passover, when Jesus was in Jerusalem and sat at the table in the house of Simon the leprous. In this case all the disciples got angry with the woman because they thought at the will of the Lord to do charity. More than this, the sinful woman was rewarded by relating her good deed in the whole world.

Thus while some people say that is the same woman, saint John Chrysostom says that in fact there are two different women.

There are others who say that they were three: the two mentioned above who poured ointment over his head before his crucifixion and a third one long time before them, who was in fact the first to pour ointment over the Lord, during the middle of the evangelical preaching. She was a harlot, a sinful woman. She came to the house of Simon, the Pharisee, not of the leprous.

She poured ointment on Christ’s feet and her deed scandalized only the Pharisee. And she is the one who is absolved of her sins by the Savior.

This sinful woman is mentioned only by Luke the evangelist, about the middle of his Evangel, as it has been already said. After he relates the deed of this sinful woman, he adds the following words: Then Jesus traveled throughout towns and villages preaching the Kingdom of God

These words show that the deed of this sinful woman was not done before the Crucifixion. Thus, taking into account the time and those who received Christ in their houses and also the way the ointment was poured, it results that there were three women: two sinful ones and the third, Lazarus’s sister, Maria, who had a virtuous life.

In what regards the houses, one is of Simon the Pharisee, another of Simon the leprous and the third is the house of Lazarus’s sisters, Maria and Martha, from Bethany as well. From all these it results that Christ had two suppers in Bethany: one 6 days before Passover, in Lazarus’s house, when Lazarus ate with him, according to the words of the Son of Thunder  who says: Six days before Passover Jesus came to Bethany where was found Lazarus, who was already dead and Christ revived him from the death. And there they offered him a supper and Martha was taking care of that and Lazarus was one of those who sat with him at the table. And Maria taking a pound of the most expensive nard ointed the feet of the Lord and wiped them with her own hair. The other supper offered to Jesus was two days before Passover while He was in the house of Simon the leprous. Then He was approached by the sinful woman who poured the precious ointment over his head. The fact that it happened two days before Passover is shown by Matthew, the evangelist, who writes that Christ told his disciples: You know that Passover is coming in two days. And a bit later Matthew the evangelist adds: And while being Jesus in the house of Simon the leprous, He was approached bya  sinful woman, who had an alabaster with very precious ointment and poured it over his head while He was sitting at the table.

Mark says the same: Now the Passover and the Festival of Unleavened Bread were only two days away, and while He was in the house of Simon the leprous and sat at the table, a woman came  and all the rest.

There are some people who say that the woman who poured precious oil over the Lord, that one the four evangelists mention is the same person. They consider that Simon the Pharisee and Simon the leprous are the same person and make from him the father of Lazarus and his sisters, Maria and Martha. They also claim that it is the same supper in the same house, that one from Bethany who belonged to Simon the leprous who prepared the pavilion where it took place the Last Supper.

The Last Supper and the pavilion were prepared in Jerusalem one day before the Passover and Jesus Christ’s Crucifixion. Some say they prepared the supper of an unknown man, some others say they prepared it in Zion, in the house of John the disciple who put his head on the Lord’s chest. Here indeed the disciples hid being afraid of the Jews. Here after the Resurrection Thomas touched with his finger the rib of the Lord. Here it took place the descent of the Holy Spirit on the day of the Pentecost and many other unrelated and secret events.

But it seems that saint Chrysostom’s assumption who says that there were two women who poured ointment on the head of the Lord is the accurate one. One of these two who was mentioned by the three evangelists, was the sinful woman. She poured ointment on the head of Jesus. The other one, who appears in saint John’s Gospel is Maria, Lazarus’s sister. The suppers from Bethany and the Last Supper are not all the same. And this it shows when the Savior after it is related the parable with the sinful woman sends his disciples to prepare the Passover supper:

He replied, “Go into the city to a certain man and tell him, ‘The Teacher says: My appointed time is near. I am going to celebrate the Passover with my disciples at your house.'” And again “As you enter the city, a man carrying a jar of water will meet you. Follow him to the house that he enters, and say to the owner of the house, ‘The Teacher asks: Where is the guest room, where I may eat the Passover with my disciples?’He will show you a large room upstairs, all furnished. Make preparations there.”

And when they went it happened as he had told them and they prepared the Jewish Passover that was approaching. The Savior came and celebrated with his disciples according to saint John Chrysostom. Then after the Last Supper had ended and He had washed the feet of his disciples, He sat down again and set on the same table our Easter, according to saint John Chrysostom.

The holy evangelists, John and Mark described how it was the ointment. They called it pure and of a very high price. By pure it is described what is unadulterated and unblended. Thus it may be assumed that it was described the best and most precious ointment. Mark adds that the woman broke the vase that had a narrow mouth. He calls it alabaster. This vase according to saint Epiphanius was made of glass and without a handle. A vase like this is called amphora. That ointment was made of many ingredients: myrrh flowers, cinnamon, irises, fragrant cane and oil.

But You Lord Jesus Christ who were ointed with spiritual oil, free us of all the passions that come over us and have mercy on us as the only one who is most kind and  loves men. Amen. 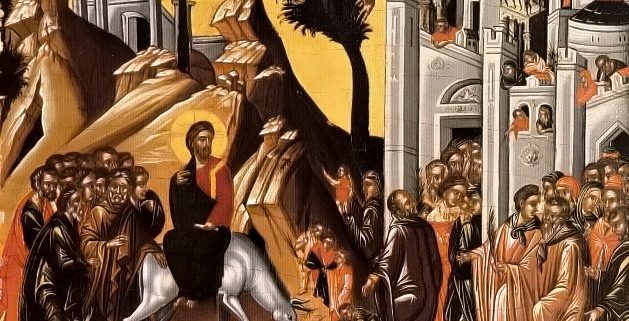 The healing of a sick woman A large crowd followed and pressed around him. 25 And a woman was there… 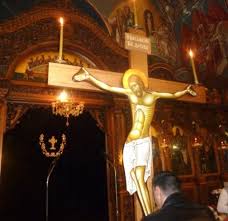 A child asked his mother: ”Mother, I want to meet Christ and I don’t know where I can…