Two years ago in a town from America we gathered at a church and we were talking. After we had discussed about a lot of things the priest who translated finished the talk and it was set to continue on the next day. Among the listeners I saw someone who was restless. He wanted something.

`Father, I said, let-s listen what this man wants to say.

That man stood up and he said very indignantly:

Then I asked the priest to wait for a while.

Then I spoke to him about the existence of God and stopped at the following story:

Napoleon the king of France was very wise and experienced especially n the art of war, namely in finding strategies to defeat the enemy. He was also very faithful and pious. But he had an unfaithful general who did not believe in God. The emperor knew this and he tried many times to make the general believe but this one opposed and refused to believe. One day the emperor told him:

`Tomorrow I invite you to dinner.`

`Me?` asked the general.

`Yes, you. I want to have dinner together. Don’t you accept?`

`It’s an honour for me but I don’t deserve it.`

`Take a seat. The first thing I am going to tell you is that this globe placed itself here.`

The general looked at him surprised.

`No, I’m not joking at all`, Napoleon said. I believe this globe made itself alone. But I don’t know how it happened. Anyway it placed itself alone on this table`

`I think it is possible.`

`Your highness, do you think I’m crazy?`

`Yes, you are. If you think that this globe which means nothing was made by someone, how can’t you believe that the whole universe that works so accurately was made by God? It has been working for so long without being disturbed in its work at all. Because the slightest disturbance might bring the destruction of the whole universe. `

Immediately after the general heard these raised his hands in the air and said:

I give in, I believe in the existence of God.`

This is what I said then and the people who heard this got excited and started to applaud because this story gave an obvious evidence of God’s existence. And that Christian became quiet and I told him:

`Man, come tomorrow to the church to confess and I shall tell you many other things for the strengthening of your faith in God.

He came, confessed, I told him many things about God, I sent him a good book to strengthen him in faith and in this way he put himself in order.

This man was brought by a pious woman because he had no fate under the sun. He was living alone in foreign houses, because he had no relatives. This woman, when she understood that he didn’t believe in God, felt pity for him and took him to the church to find comfort there. This summer I got a call from this woman:

`Father Ephrem, do you remember me?`

`But what about Kostas?`

`Kostas died. I’ve been trying to find you on the phone for two weeks to mention him at 40 liturgies. Listen what happened. This man went to Greece. He got sick and then he returned to America. When he was in Greece I called him to ask him how he was feeling.`

`Come here to help you.`

So he left that place and came back here.

`Kostas, let’s go to a priest to confess and commune.`

And he felt it was necessary and said:

I called the priest, he confessed and communed. Then I told him:

`Now since you’re sick let’s go to the hospital to see what you have.`

The medical tests showed he had many cancerous tumors, and they sent him back in the ward without any surgery.

`Kostas, you have to take the Holy Eucharist.`

I brought the priest with the Holy Eucharist – my husband was in the ward too. He cried:

`Kostas, open your eyes to take the Holy Eucharist.`

But he was in agony and didn’t understand. I turned him on one side, on the other, but nothing. Then I knelt down and started to cry and pray the Lord: `My Lord, open the eyes and the mouth of this man to commune with Your Most Holy Body and Your Most Precious Blood. Have mercy, my Lord.`

And in the end in a wondrous way he opened his eyes, then his mouth and communed. Then he closed his eyes and fell into lethargy. I was so glad that I knelt down with my husband and praised the Lord. All of a sudden that man opened his eyes, stood  up in the bed, raised his hands up and started to thank and praise the Lord for His mercy He showed to him because apparently he felt the grace of God. Then  he sat on his pillow and after breathing thrice he gave his soul to God.

When I heard this on the phone I felt so excited that I said:

`My daughter, I bless you so many times I cannot express.`

Excerpt from the book The Art of salvation to be published at Evaghelismos.

God can’t be seen, He does’n show up if there is no purity

Abstinence, fast, vigils, the leaving of the worldly things and all the rest are means, my son, for…

GOD GIVE US BEAUTIFUL AND HEALTHY OFFSPRINGS

Priest Ioan Istrati An old woman shuffles her feet through the church. She is coming to confess her.… 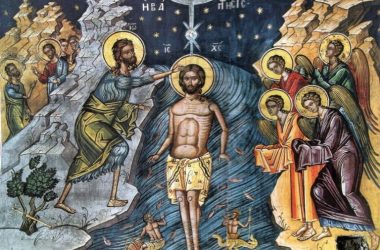