With joy and thirst for God, our ancestral Church especially after 1990 urges us insistently to spend the night between the years in prayers in the holy places: first to meet with God, Who created the time and reigns over the ages and then who wants may join the urban parties or follow the suite of traditions from the New Year`s Eve kept constantly in the world of the Romanian village.

If during the communist regime only in monasteries they kept vigils until late hours at night in the cities and villages this thing was forbidden. Despite the interdiction the faithful Romanians constant in their relationship with God have never forgotten the words of a beautiful song: `always start your work with God.`

Thus although the people could not meet at the church from the village or from town like nowadays many of them prayed together in the comfort of their homes spending the moment of passage from one year to another with God, beginning the new year with the One above time as it happened during my childhood.

I will never forget the mystery of the night between the years as it was revealed to me at the age of innocence when we the young got ready to go caroling. After the peaceful Christmas evenings when the repetitions increased and the drums, squeezed-boxes and scourges were heard more often on the New Year`s Eve the roads of the village were full of noise and we went out to with to the villagers the due ones.

IN the noise of the children my mother was working with zeal to fulfill a tradition set from the old times : two days before the passage between the years she prepared with a great care the rolls she was to welcome the carolers with, calling them the rolls of Saint Basil.

Then with great care she cleaned the vigil lamp reminding us that the time renews and everything must be clean.

From the same ancestral tradition was the duty of the children to take care of the animals from the yard: mother and grandma informed us very convinced that only once a year, on New Year`s Eve the animals spoke and it was not due to complain to those of the neighbours that they were not taken care of and well fed.

You don`t imagine what credibility had in our mind those unwritten laws uttered firmly by parents or grandparents.

With a care increased by the zeal to have the animals from our household content and with what to boast to their neighboring fellows me and my brothers helped by father prepared everything as for a real inspection my mother made in a rush;

Only afterwards she gave us the long expected consent to go caroling but not before going to the icon of the Savior to make a short prayer wishing that our action may be put under the careful eye of God, becoming our guide on the roads of the village. In the evening or late at night we returned home very often frozen and hungry and went into the kitchen where we always found a pot with simmering cabbage rolls which was spreading an appetizing smell around the room.

In the morning we went out again caroling but not for a long time as it was set to go to the church where the holy service had a special air and the people proved ready to feel the spiritual freshening together with that of the time.

Later I found out that grandma and mother on the New Year`s Eve after we left caroling began a certain kind of vigil. At the light of the vigil lamp or of the fire from the fireplace said or read prayers until after midnight.

One year, having a bad cold and not being able to go caroling with my mates,  I remained with my grandma. Outside the viilage roared of the noises made by the carolers but in house of the old woman the atmosphere seemed taken from the pages of the Patericon. The light of the vigil lamp guarded the room and grandma keeping an old Horologion in her hand read the Akathist of Christ the Savior then of Saint Basil the Great.

This is how the elders spent the passage from one year to another and this is how we should spend it too. With the unborn Christ born in our souls, freshened by His youth and renewed by His newness let us head towards the New Year with the wish to spend it healthy with plenty of light and accomplishments. But especially with the wish to live fully our ancestral Orthodox faith: in its entire truth, strength,  beauty and holiness.

In the mystery of the lit candle from the table…

There are two parts of life 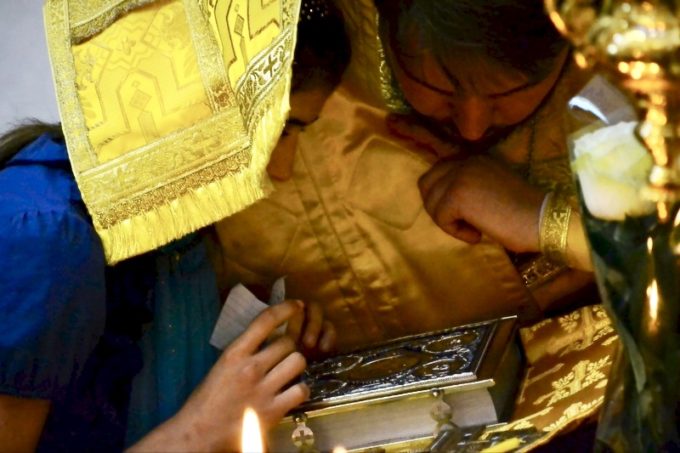 Monk Moses the Athonite The discernment distinguishes what is just, it chooses what is useful, it judges what…