`Father, how many hermits [1] are in the Holy Mountain?`

`I don`t know. Some say they are seven. [2] Lately it`s been very difficult to find someone a quiet place where to live like a hermit. For this reason some fathers when there still were some idiorhythmic monasteries [3] in the Holy Mountain they foud a different way to live in reclusion. For example they said: `I don`t find rest here so I will go to that idiorhythmic monastery to work and gather some money` and the others believed him. They went there and worked for 3-4 months and after that they asked for more money. As they did not receive it they said: `I don`t like it so I`ll go.` They took some dry bread and went to hide in a cave and became hermits. The others had the impression they went to work in another place. If they asked at the monastery: `Did this father pass by? And those answered: `Yes he passed by. But he was so capricious. He wanted to gather money from us. He asked for more money. To be a monk and ask for more money! What monk is that? Thus the hermit benefited from his ascetic endeavours and from the slanders of the others and from the robbers. The robbers found out that a certain person had money and went to the cave and tormented him but in the end they didn`t find anything.

`Father, how can I follow the virtue of a sister when she hides herself?`

`If she doesn`t hide everything is lost. The saints made more ascetic efforts to hide their virtue that to gain it. Do you know what the fools for Christ did? They got rid first of all of the worldly hypocrisy and then they entered the space of the evangelical truth. But these were not enough for them and they advanced to the holy hypocrisy for the love of Christ. Thus they were not bothered anymore by anything it was done or told to them by the others. But to do this it is needed a great humbleness. While a man from the world feels offended when someone tells him a word or he is upset when he is not praised for something he did, these men were glad when the men had a wrong opinion about them.

Long time ago there were even some monks who pretended they were demonized to hide their virtue and make the others change their good opinion they had about them. When I was in Philotheou Monastery [4] which was idiorhythmic at that time there was a monk who had lived as a hermit at Vigla [5] When he saw the other monks knew his ascetic endeavours and his spiritual progress he left with the blessing of his confessor.

`I got tired of eating here moldy dry bread I will go to a idiorhythmic monastery where to eat meat and live like a man. I am not a fool to stay here anymore. Coming to Philotheou he pretended he was demonized. The monks hearing he was demonized said to one another: `It`s a pity that the poor man became demonized. It was expected to happen this. He left this place because the dry bread was moldy and went to another monastery to eat meat. But what this one did? For more than 25 years he had not cooked anything for himself or slept He was walking all night long on corridors with a lamp in his hand so that he could not fall asleep. When he got tired he leaned for a while on a wall and when he felt he was going to fall asleep he said in a whisper the prayer: `Jesus Christ…` and continued it in secret. Sometimes he was not aware and the prayer was heard. When he met a monk that one said: `Pray, pray so that the devil may leave you.` Thus all of them considered him demonized. A monk of about 15 y.o told me one day: `This is demonized.`

`Don`t say that` I told him. `This one is very virtuous and he pretends he is demonized.`

After that he had respect for him. When he died the monks found him holding in his hand a paper where he wrote the names of all monks with some nicknames for them so that he could make them even being dead to change any good thought they had about him. In the end his body exhaled good perfume. See he wanted to hide himself but the Grace of God revealed him.

That is why no one should draw conclusions about a man from what he sees if he can`t guess what it is hidden.`

[1] In 1950, when elder Paisios went to the Holy Mountain for the first time seeking the path which led from Kafsokalivia to the skete of Saint Anna he met a hermit with a bright face…he might have been about 70 y.o who according to his garment seemed to have no connection with the people. From his appearance you could tell he is a saint. (Pious Paisios the Athonite, Athonite fathers, ed. Evanghelismos, Bucharest, 2004, p. 48). When he asked the hermit where he lived that one answered: `Somewhere around this place ` and showed him the peak of Athon. Later experienced elders confirmed to him that on the top of Athon twelve hermits lived unseen.

[3] Idiorhythmic is called the monastery where every monk has his own program and he is paid for his work by the trustees who lead the monastery.

[4] One of the monasteries of the Holy Mountain.

[5] The desert of Vigla is found in the south-eastern part of Athos. 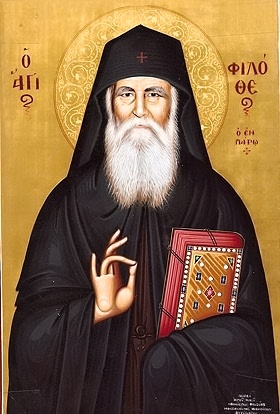 The union of the churches will succeed only by true humbleness

Archimandrite Philoteos Zervakos The union will succeed only by humbleness, repentance and return to God, to the Orthodox… 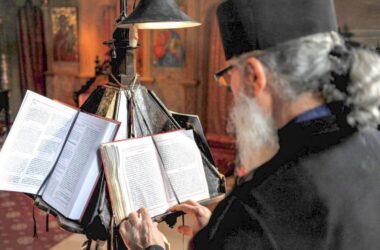 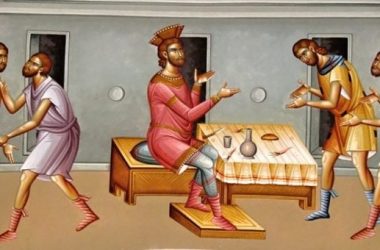 For you are the seal of my apostleship in the Lord. 3 My defense to those who examine me is this: 4 Do…